Thijsse's Court was laid out in 1925 on former potato beds with oak coppice in the Bloemendaalse Bos on the occasion of the sixtieth birthday of Dr Jac. P. Thijsse. From the very beginning, Thijsse set the goal to present the wild plants from Kennemerland in natural vegetation that develops (largely) spontaneously.

The official name is: Thijsse's Hof, Planten- en Vogeltuin in Bloemendaalsche Bosch. Thijsse described the Court as an 'instructive park', but nowadays we use the term 'home garden'. In the Hof, plants and animal species from South Kennemerland are being demonstrated for a broad public in natural vegetation such as dune forest, thicket, dune grassland and dune valleys. In addition to the more than 400 species of higher plants and about 24 species of breeding birds, many other plants and animals can be seen, such as leaf, liver and lichens, mushrooms, the vine snail (occurs naturally in this area), butterflies, dragonflies, wild bees and water creatures.

At the start of each of the four seasons, 26 schools with around 1000 children attend an instructive visit to the Court. Many people visit the Hof during the year to see all the beauty or experience an excursion. It is a total of about 15,000 visits in total.

The Court is managed by a private foundation with many volunteers and one appointed gardener / manager.

The official name shows that it is also a bird garden, but there are no aviaries. The birds in the Hof are wild birds, who find the area of the Hof attractive to live or seek food. In the course of the more than 90 years that the Court has existed, the vegetation has changed quite a bit: from a large open area with low trees around it to a large, thickly covered area in the middle of a forest with tall trees around it. That has obviously had a big impact on the birds. Nightingale, fitis, warbler, collared redstart and summer-root have disappeared as breeding birds. Thrushes, finches, species of the species, robin, wren, wood pigeon and chiffchaff rose. In the sheltered pond, kingfisher birds regularly feed.

The great spotted woodpecker settled. The Court has on average about 24 species of breeding birds and many dozens of bird species as visitors. Birds can be observed in all seasons. The many benches in the Hof make it possible to sit patiently. In the spring there is a lot of birdsong, but even on a quiet winter's day you sometimes get surprised by a bunch of siskins hanging from the alder clumps near the pond, or a mixed group of all kinds of tits, goldencurrants and finches that strip the trees and bushes in search of a little bite. The Hof is definitely an attractive place for birdwatchers. 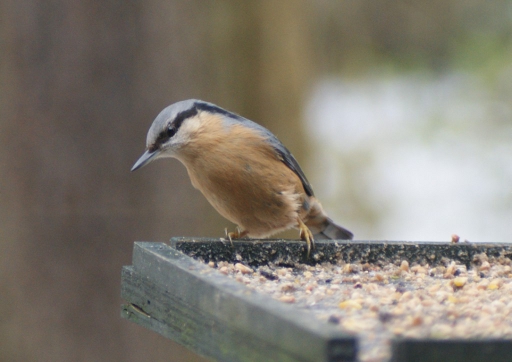